Travelin' man, that's what I was. 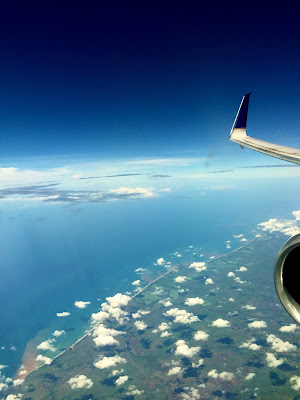 Travel has always been a constant in my professional life.  There have been gaps but for the most part I've had to travel for business constantly since I joined my first company after grad school back in 1989.   Growing up we were a Pan Am family because the company my father worked for was owned by Pan Am and, much of the time, we were able to fly first class on airline employee passes.  As a child I developed a distorted idea of how normal people traveled.  But, we had it good for a long time.

In the late 1970s - early 80s all the fun was soaked out of flying.  It became an angry experience.  People didn't dress up to fly any more.  No one wanted to take you to the airport to see the planes.  People get ugly and angry with frequency.   I admit to some of that myself on occasion.

Over the past three years, I traveled internationally far more than I expected.  Our business was challenged (to understate our circumstance) and this situation required me to be in the UK almost constantly.  When friends and colleagues ask me about this experience they have - on my behalf - tried to calculate miles and round trips and hours spent.  To be honest, while the travel was far more than expected it wasn't my place to complain but friends (and Mrs PND) with more objective points of view remain astonished that there wasn't an intervention of sorts to help reduce my travel.  There was no way this could continue at this level.

So I got to thinking what the numbers really looked like and here's what I came up with for my travel over the past 36 months:
That was my job (and I wouldn't wish it on anyone).   In order to make sense and reduce stress and anxiety a set of routines are almost forced on the frequent traveler.  I knew the configuration of the different planes traveling between the US and UK so I'd look for specific seats to grab.  I'd try to execute a strategy so that I could maximize the chance of the seat next to me being left open.  Having a little more room to sleep on an over night flight becomes the most important goal in the days running up to departure.  But flights on Sunday (out) and Thursday (home) are rarely empty.  Sunday departures were always the worst since I'd begin packing around 3pm and leave for the airport around 4.  But, arriving Monday morning gave me the 'right' to return on home Thursday night.

Since I left PT (now "Ingenta") I've continued to travel but I don't see myself spending this amount of time on aircraft and at airports any time soon.

Michael Cairns has served as CEO and President of several technology and content-centric business supporting global media publishers, retailers and service provider.  He can be reached at michael.cairns@outlook.com and is interested in discussing new business opportunities for executive management and/or board and advisory positions

Email ThisBlogThis!Share to TwitterShare to FacebookShare to Pinterest
Labels: From the air, Travel