Pan Am in Tehran 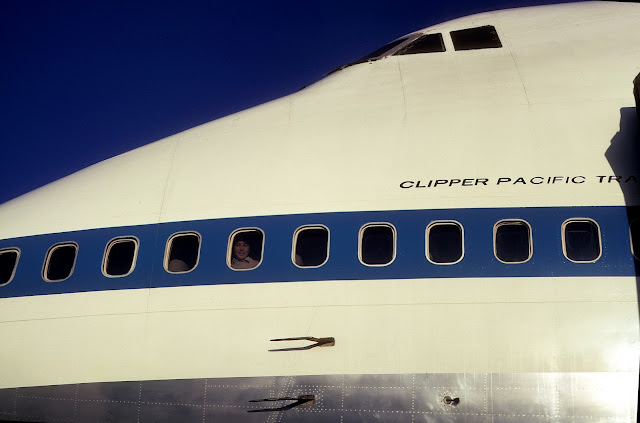 Yes, if you look closely there is a person in there and it's me.  Sitting in row 2; approximately, and just about to depart the plane which is on the tarmac at Tehran International airport.  Over the northern summer in 1972, I got to travel with my Dad back to the UK (from New Zealand) where he left me and went on to Columbia Business School for the summer.

There are four photos in this sequence which also includes a full length image of the entire plane set against a brilliant blue sky, and seeing that Pan Am 747 brings back a lot of memories.  This jet named Clipper Pacific Trader was with Pan Am from 1971 (when it was delivered) to 1984 but at one point it was loaned (oddly) to Iran Air.  Interesting that we were flying on an almost new aircraft at the time and Jumbo jets were still very new generally.  People used to come to the airport to see them!

Naturally, through the power of the internets you can trace this aircraft's entire history all the way to the bone yard in Arizona where it now sits on blocks.  Everything has been removed including the wings and the fuselage and it just sits there like a beached whale.

In addition to the images I've posted on Flickr and those I've periodically posted on PND, I have now produced a Big Blurb Book: From the Archive 1960 -1980 of some of the images I really thought were special.
Posted by MC at 5:26 PM