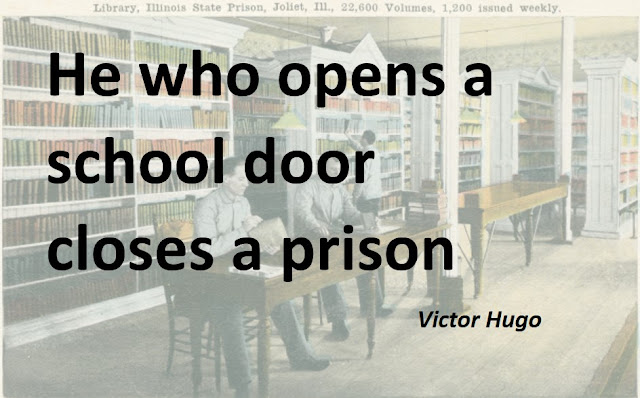 The approach to education in prisons is improving and expanding Pell Grant eligibility will accelerate change but industry groups should do more.

For fifteen years, my mother-in-law taught inmates at the Hudson Correctional Facility how to read. There were never enough resources provided, but she took it upon herself to write pleading letters to publishers to ask for free books to use for teaching. Occasionally, she would get a book box of whatever the publisher had at hand – cookbooks, how-to manuals or romance fiction – and she made the best of it. Small though her effort was, she believed what many enlightened prison administrators now understand: That delivering education to inmates improves outcomes.

Ask any prison-enlightened pol what metric is most important in determining the success or failure of incarceration and they are most likely to cite recidivism – how many released prisoners return to the system. It’s also the one they would most like to improve. America has one of the largest incarceration rates in the world (IHEP) and also one of the worst recidivism rates. More focused on warehousing inmates than on rehabilitation, the US prison system still takes no collective responsibility for a revolving door system which keeps hosting the same participants like a warped frequent-flyer program.

The now infamous mid 1990s crime bill has come under intense scrutiny in recent years for the impact it has had on the growth of the US prison population and its disproportionate impact on minority communities. An amendment to the bill added by Kay Bailey Hutchison pulled Pell Grant eligibility from incarcerated individuals and effectively shut down an important avenue to self-improvement for prisoners (CHed). Recently, prison education programs have begun to improve but reestablishing Pell grant eligibility would significantly accelerate the growth and innovation of education programs tailored to the inmate population.

While the average annual cost of holding an inmate is around $35K (FedRegister), some calculate the annual cost over $100K (NYTimes) and current re-offending rates in this country are as high as 70%, with more than 50% returning to the prison system.  There is an abundance of research proving that the implementation of prisoner educational programs decreases the chance the individual will return. Education programs don’t just reduce these rates marginally they do so materially – investment in education programs can yield hard benefits four or five times their cost (Rand). Society benefits as well with improved community and family benefits tied directly to reduced incarceration rates.

Significant student and infrastructure issues impede delivery of prison education at the point of need including wide variation in student capabilities, mobility and facilities as well as a lack of materials and staffing. But curiously, the bars and cuffs aside, these problems are similar to those overcome by students and institutions in the ‘outside world’. For example, prisoners can be moved from facility to facility (often with little or no notice) and have trouble transferring credit. Similarly, traditional students move from institution to institution, but here the education system is rapidly delivering solutions to make this more seamless.

Even on a traditional campus, students sometimes learn outside a conventional classroom due in part to infrastructure issues. Challenges affecting students on the inside and the outside may be different only in the way solutions are presented to overcome them. In prison, we prioritize punishment (and the system) over rehabilitation and educational learning. But, as the justice system begins to embrace education and priorities change, solving these impediments may be simpler than it may appear.   It is possible given sufficient motivation and the freedom to act, that technical and delivery challenges could be solved by businesses applying solutions designed to solve issues in the traditional education market.

Earlier this year, Senator Brian Schatz (D-HI) introduced a bill (HR2168) to reinstate Pell Grant eligibility for the incarcerated, freeing up additional funds for prison education. Unfortunately, there’s not much of a chance the legislation will be brought to a vote in this Congress even though prison reform is one subject that enjoys cross-party support.  The Obama administration created a unified district out of the entire federal prison system, in part to enable the development of universal solutions. And, while this was rescinded by the current administration, it will eventually return, expanding opportunities for business to have a broad impact in the delivery of prison education solutions.


In terms of educational content (textbooks and online content), I would like to see industry associations like the American Association of Publishers (AAP) and American Library Association (ALA) advocate strongly and press their members to engage in active support of prison education programs. Advocacy and positive societal change can be affected by these industry groups and publishers have little to lose (in terms of revenue) providing free or highly discounted content to the prison community. The cost decreases further with digital resources. Both AAP and ALA have the opportunity to create a public good by reducing recidivism through education while also having a meaningful impact on the lives of inmates, their families and their communities. As a past board member of the AAP, I can confidently say this is not the type of initiative they have historically backed but, in my view, it should be something they should get behind. I’d like to see that happen as the benefits are so significant.

*****
Michael Cairns is a publishing and media executive with over 25 years experience in business strategy, operations and technology implementation.  He has served on several boards and advisory groups including the Association of American Publishers, Book Industry Study Group and the International ISBN organization.   Additionally, he has public and private company board experience.   He can be reached at michael.cairns@infomediapartners.com

Are you considering an investment in new technology?  Check out my report on software and services providers.  (PubTech Report)


PND: The Price is Right for Cengage


PND: The Opportunity in 200MM Students


PND: The New McGraw-Hill.  Where is Education Textbook Publishing Headed?