Traveling this Big Country: 3200 miles in a Honda Element 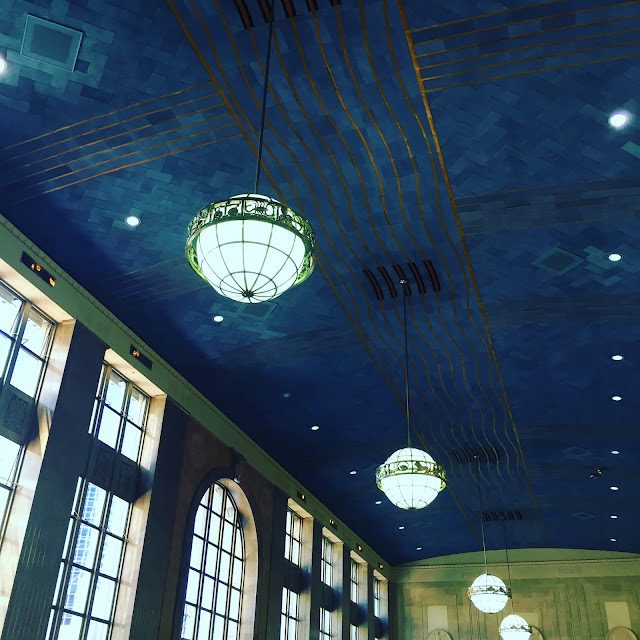 It is frequently said that the fastest way between two points is a straight line and there's no better argument for that thesis than the route Interstate 40 (i40) takes between Knoxville, Tn and Kingman, Arizona. There's no reason to know this unless, like me, you've driven i40 across the US.
Back in 1988, as I was graduating from Georgetown a fellow student happened to mention that he had no idea how he was going to get his car back to his home in California. On a whim, a friend and I told him we would drive it for him and, long story short, we set of in early May and arrived in Los Angeles about 12 days later. Great trip, good memories but few photos to catalog this adventure. The car - a white Camaro was a disaster but, that aside, I wanted to do the trip again almost immediately.  (You can find images from this trip HERE)
A few years ago, I read about a company which will arrange to move cars from one part of the country to the other. The car can go on a truck - most expensive option - or it can be driven. The company finds a driver to do the grunt work and signing up to do this is actually a lot easier than you might expect. An outfit named autodriveaway (a loose franchise operation) publishes a list of available cars and if you are interested you call the location with the listing. I began checking the list regularly and in late April a pair of cities - pick-up in Alexandria and drop off in San Francisco - looked promising. Once I got in touch with the Alexandria office, I had the whole thing worked out within a few days.
On the morning of Monday May 23rd I took Amtrak to Alexandria, picked up the car and spent the night at my sister-in-laws' place. The next day, I was on the road out of DC by 7am to my first stop in Knoxville. The car was an orange painted Honda Element which I tried to pass off a 'burnt gold' until my sister in law said "that's orange" which settled the matter. I arrived in Knoxville around 5pm which turned out to be a consistent routine for the next week until I arrived in San Francisco six days later.
The country is so vast and so variable that it needs to be experienced to comprehend. Deep green fields and red barns through Virginia, rolling hills through Tennessee, flat farmland in Texas, desert in Arizona and snow capped mountains in California. And i40 is very straight. Often coming over a rise, the road ahead would stretch directly straight to the horizon. It's mesmerizing if you're not used to it as well as being hard to photograph while driving.
Running along side i40 is the old route 66 and I like neon, old store fronts and buildings. There's still a lot of this on route 66. If you are not in a hurry and willing to dart off i40 and (frequently) back-track to something that caught your eye going 80mph this travel can be very distracting. These side trips turned up more than a few curious and interesting sights. In Shamrock, Texas I happened on a car graveyard in a field just off main street. There were more than 30 abandoned, rusted, shot up cars and trucks from the 1930s-60s. I spent a while taking photos and no one bothered me: Things seemed to go slowly in Shamrock. There were Trump yard signs.
I deliberately didn't give myself time to explore the cities where I spent the night: Knoxville, Memphis, Oklahoma City, Albuquerque, Kingman, Mammouth Lakes and I know there is much more to see on this route. For next time. I had to keep to a schedule so I could get in business meetings once I arrived in San Francisco.
The entire trip was fantastic but the penultimate travel day from Kingman, bypassing Las Vegas to Death Valley, and then north to Mammoth Lakes was incredible for the change in scenery, landscape and temperature! When I arrived in Death Valley the temperature was 107 degrees at 120feet below sea level and arriving at Mammoth Lakes it was 52 degrees at 7000 feet. The final day drive through Yosemite via the Tioga pass road was like a roller coaster ride up through mountain passes and then down the other side to San Francisco. Up to (almost) 10,000 ft with snow still on the ground compared to yesterday's 107degress was disorienting. Pushing on through the park, I saw the remnants of charred pine trees from those massive fires several years ago and then golden fields of drought stricken grasses on the Western side of the range.
A week after I set out, I dropped the car off with the owner, who I had never met and, in one of those odd coincidences, it turned out we had several common business friends. I spent the rest of the week sightseeing in the city and attending my business meetings and then flew back at the end of the week. During the trip I took over 600 photos - all without crashing the car. (They are all here: https://goo.gl/DkfFvh ). I traveled about 3200 miles on total.
Drivers don't get paid for these trips, although I did get a $300 gas credit; for me, the trip would not have been worth it - too expensive - unless I had a better way. So the best thing about this whole trip was that I did it all using airline points. All the hotels, the train and the business class flight back cost me nothing. At least that's something I got out of traveling so much over the past three years.
I look forward to doing this again sometime and I wistfully keep looking at the list of available cars. But with a house literally in ruins it's not likely for a long while.
Posted by MC at 7:15 PM

Email ThisBlogThis!Share to TwitterShare to FacebookShare to Pinterest
Labels: Travel