The way Amazon is going with the relentless push to add more and more value to the Amazon Prime membership there won't be any more content that isn't included in the membership fee.   Hyperbolic certainly; however, Amazon has just added more than 1,000 books, comics and magazines which Prime members can access for free via phone, tablet or Kindle device. 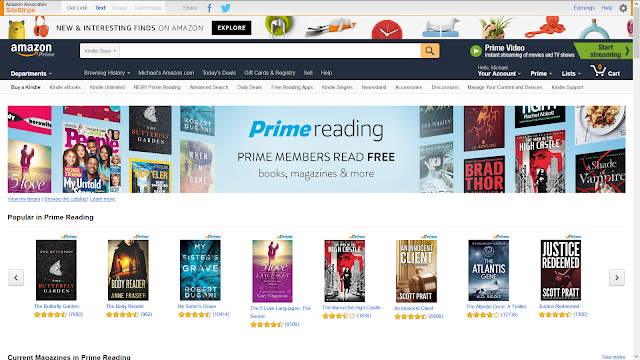 
There are currently 42 magazine issues listed in the program, called Prime Reading, including familiar names like Sports Illustrated, Vogue, Bloomberg Businessweek, and Consumer Reports. “Every month we choose a selection of top magazine issues for you to borrow as part of your Prime membership,” Amazon said. Users can download up to 10 titles at once.


Originally, I and probably most people joined up when in the process of buying something big the promise of free shipping prompted a 'why not' shrug to their Prime promotion.  Years later and the free shipping pays for the membership but, most importantly (in my case anyway), it has worked glue-like in the manner of airline miles to encourage loyalty.  The added stuff like book and magazine content and audio books announced earlier this year are increasingly making a tie that won’t ever break.

Several recent news stories put the number of Prime subscribers over the 50mm household mark.  It is also estimated that Prime members, who pay $99 per year for the membership, spend roughly double non-members.  (Twice)  The reports and estimates do tend to feed on themselves because Amazon is very cagey about reporting out actual data.  Other recent reports include BusinessInsider and CNN.
Posted by MC at 5:25 PM

Email ThisBlogThis!Share to TwitterShare to FacebookShare to Pinterest
Labels: Amazon