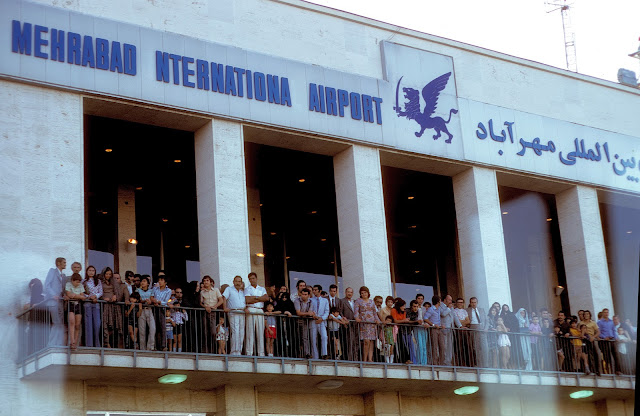 This was shot through the windows of the bus carrying us from the plane to the terminal which accounts for the white discoloration on the image.

The welcoming committee at Tehran's International Airport is a lot more diverse in this photo than you would likely see today.  Today, women are not allowed in public without a head covering and there are more than a few without in this photo.  There are also a few women in decidedly western outfits suggesting how much more cosmopolitan Tehran was under the Shah than today.  (Of course, he compensated in other ways).  Another thing about this image is that flying used to be an event and while today we crowd around unimpressive and anonymous double doors waiting for our family members and colleagues to get through immigration, in the old days we could go to the viewing balcony and maybe get a glimpse of them, and more importantly the plane, before we met them in the terminal.  I would expect many of the people in this photo are visiting the airport for the first time.  Imagine what they thought of that gigantic Boeing 747 sitting on the tarmac.

If you look carefully near the middle of this group, I think there's a g-man (one of ours that is).