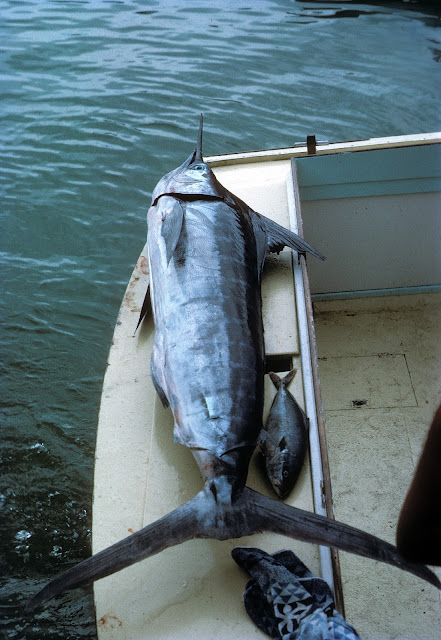 One day in January 1974, my father went out ocean fishing for the first time and came back with this fish.  It was the first of the Marlin season and he got himself a nice silver plate.  Earlier in the day, I am not sure he even knew such an award was in the offing.  Almost right after this picture was taken, the whole fish fell off the back of the boat and started to float out to sea.  One of the fishermen (that is, someone somewhat more expert than my father - said fish excluded,of course) had to jump into the harbor, chase it down and lung it back to the boat.

Several years later a cleaner took Ajax powder to the awarded plate and it had to be re-plated.  So there you are our family fish story.

In addition to the images I've posted on Flickr and those I've periodically posted on PND, I have now produced a Big Blurb Book: From the Archive 1960 -1980 of some of the images I really thought were special.
Posted by MC at 1:00 AM