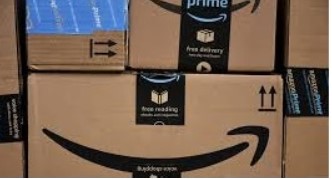 The Amazon Publishing Juggernaut: What does the e-commerce giant want with the notoriously fickle world of publishing? To own your every reading decision. (Atlantic)

"Founded in 2009, Amazon Publishing is far from the tech giant’s best-known enterprise, but it is a quietly consequential piece of the company’s larger strategy to become a one-stop shop for all your consumer decisions. As Amazon Studios does with movies, Amazon Publishing feeds the content pipelines created by the tech giant’s online storefront and Amazon Prime membership program. At its most extreme, Amazon Publishing is a triumph of vertical engineering: If a reader buys one of its titles on a Kindle, Amazon receives a cut both as publisher and as bookseller—not to mention whatever markup it made on the device in the first place, as well as the amortized value of having created more content to draw people into its various book-subscription offerings. (One literary agent summed it up succinctly to The Wall Street Journal in January: “They aren’t gaming the system. They own the system.”)

The Amazon dilemma: how a tech powerhouse that fulfills our every consumer need still lets us down. Despite increasing criticism, Amazon refuses to acknowledge many of the unintended consequences its rise to dominance has spawned. (ReCode)

"Let’s start with Amazon’s power. Its roots can be traced back to a potent cocktail of vision, fortuitous timing, relentlessness, and a knack for exploiting loopholes — from state tax laws to a dearth of regulation that could have prevented it from acting simultaneously as retailer, retail platform, and consumer brand kingmaker."

Fake Journal publishers: OMICS, Publisher of Fake Journals, Makes Cosmetic Changes to Evade Detection. Following a public outcry over their proliferation, paralleled by a media exposé together with regulatory pressures in some countries, fake journals have appeared to be cleaning up their act. (TheWire)
Mind the Gap: The landscape of open-source publishing tools (report)


The number of open source (OS) online publishing platforms, i.e. production and hosting systems for scholarly books and journals, launched or in development, has proliferated in the last decade. Many of these publishing infrastructure initiatives are well-developed, stable, and supported by a small but vigorous distributed community of developers, but promising new ventures have also recently launched.

The notable increase in the number of OS platforms suggest that an infrastructure ‘ecology’ is emerging around these systems. Distinguishing between systems that may evolve along competitive lines and those that will resolve into a service ‘stack’ of related, complementary service technologies will help potential adopters understand how these platforms can or should interoperate.

Hummm, The radical transformation of the textbook (Wired)


“Digital text, digital work, is often engaged with at a lower level of attention. By moving everything online, it’s going to become even more decontextualized. Overall, I think there’s going to be less deeper learning going on,” Trakhman says. “I believe there’s a time and a place for digital, but educators need to be mindful of the time and place for using these resources. Rolling out these digital suites is not really the best for student learning.”

Battling Elsevier:  University of California’s showdown with the biggest academic publisher aims to change scholarly publishing for good (The Conversation)

The UC-Elsevier showdown made headlines because it’s symptomatic of the way the internet has failed to deliver on the promise to make knowledge easily accessible and shareable by anyone, anywhere in the world. It’s the latest in a succession of cracks in what is widely considered to be a failing system for sharing academic research. As the head of the research library at UC Davis, I see this development as a harbinger of a tectonic shift in how universities and their faculty share research, build reputations and preserve knowledge in the digital age.


Are you considering an investment in new technology?  Check out my report on software and services providers.  (PubTech Report)
PND: Digital Transformation: A Seminar for Management
PND: Blockchain for Publishers
PND: Technology News
PND: The Price is Right for Cengage
PND: The Opportunity in 200MM Students
PND: Mediaweek Reports
Michael Cairns is a business strategy consultant and executive.  He can be reached at michael.cairns@infomediapartners.com or (908) 938 4889 for project work or executive roles.
Posted by MC at 8:21 AM