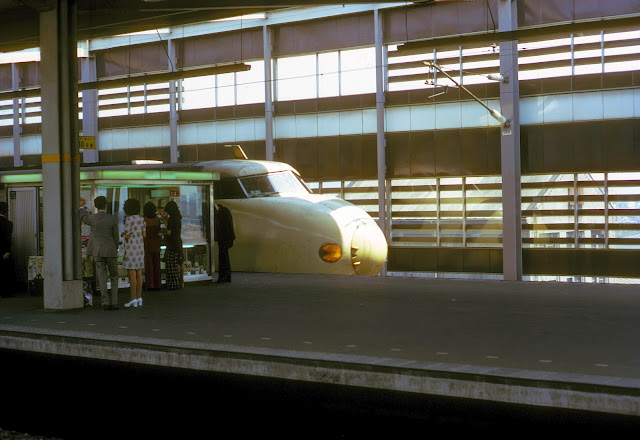 When we heard PND Senior had been on a bullet train we were very excited although as kids we really had no idea what a bullet train was and were really only reflecting the excitement of the parents.  Nevertheless, as you see from this image the engine seems to have genuine character like a bear with a big nose.  What an invention!  As side from the train there are two things I really like about this image.  The first is the tight green banding that runs around the top of the newsstand; if doesn't look like it serves any function other than for style and flair.  This image is almost mono-chromatic which makes the green stand out. Perhaps the green light means the shop is open.  The other thing I like are her white patent leather shoes.  I'm not convinced they match the outfit but then who am I to judge?


Another weekly image from my archive. Click on it to make it larger.

In addition to the images I've posted on Flickr and those I've periodically posted on PND, I have now produced a Big Blurb Book: From the Archive 1960 -1980 of some of the images I really thought were special.
Posted by MC at 2:00 AM